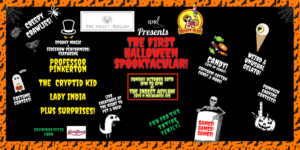 The Insect Asylum with Sideshow Gelato present the First Halloween Spooktacular!
Join us on October 30th from 1pm to 6pm for a fun filled day packed with entertainment, activities, games, chills and thrills and, of course, GELATO!

With the purchase of an Adult ticket you get the option to choose to attend a talk by lecturer and writer (Atlas Obscura) Tony Wolf on VICTORIAN SPOOK AND SPIRITUALIST SHOWS featuring actual props from spirit cabinet and séance shows. This ticket is FREE with admission but seating is limited so if you are interested in attending please select the free add on ticket.
This will be an event to remember so you don’t want to miss it!

Get your tickets here! 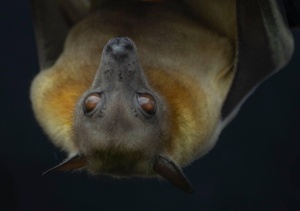 Unboxing an Antique Ghost Show (plus
an Illustrated History of Spookological
Fakery for Fun and Profit): A Live Show
and Tell with Author and Antiquarian
Tony Wolf 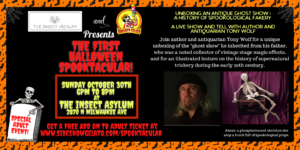 Join author and antiquarian Tony Wolf for a unique unboxing of the &quot;ghost show&quot; he inherited
from his father, who was a noted collector of vintage stage magic effects, and for an illustrated
lecture on the history of supernatural trickery during the early 20th century.

The existential crises of the First World War and the 1918 influenza pandemic sparked a
massive revival of the practice of Spiritualist séances. Whereas some spirit mediums sincerely
believed that it was possible to communicate with the dead, others were criminal con-artists
playing the “ghost racket”; employing phantasmagoric magic tricks and mind-games to rip off
the bereaved.
The Iowa-based Ghost Factory company manufactured and sold all manner of &quot;spookology&quot;
effects throughout the early/mid-20th century. Some of their customers were fraudulent spirit
mediums, while others were magicians seeking to out-do and expose the frauds. During the
1920s, Harry Houdini and Rose Mackenberg – who led Houdini’s “secret service” of spook-
busting private investigators – began a public crusade against the ghost racketeers that reached
all the way to the White House.
Later, many of these effects were also used on the Midnight Ghost Show circuit, when
magicians styling themselves as &quot;mad scientists&quot; would stage elaborately spooky haunted
house-style performances for late-night horror movie screenings.
Tony will also discuss how he discovered a trunk full of Ghost Factory props in his dad&#39;s antique
collection and demonstrate a number of the effects, including the &quot;talking skull&quot;, the &quot;rapping
hand&quot; and the &quot;appearing ghost&quot;. You&#39;ll have the opportunity to examine some of the props and
to ask questions during a talk-back session at the end of the presentation.
About Tony Wolf

Originally from New Zealand and now based in Chicago, author/antiquarian Tony Wolf
professes a lifelong interest in cultural obscurities. His books include the popular Suffrajitsu
graphic novel trilogy (2014), the true-crime anthology Houdini&#39;s &quot;Girl Detective&quot;; The Real-Life
Ghost-Busting Adventures of Rose Mackenberg (2016) and the action/adventure novel The Life
and Fantastical &quot;Crimes&quot; of Spring Heeled Jack (2020). He has also written and co-
produced/directed the independent documentaries Bartitsu: The Lost Martial Art of Sherlock
Holmes (2011) and No Man Shall Protect Us: The Hidden History of the Suffragette Bodyguards
(2018).
A veteran of the entertainment and education industries, Tony served as the Cultural Fighting
Styles Designer for the Lord of the Rings movie trilogy and has created action scenes for over
300 feature films, TV series and theatrical productions.
He blogs via alt-death.com , a curated compendium of the ways in which an emerging
counterculture of artists, designers, academics and activists are changing the mortality
conversation.

Shipping times may vary based on product availability. Dismiss